I remember the year I turned eleven as the apricot summer. The neighbor’s lone apricot tree bloomed its heart out and blessed the earth with a plethora of fruit.  Everyone around was invited to help themselves to the apricot bounty, but my mother was the only one that accepted the offer.

The tree rarely produced much fruit, due to the fact that apricots bloom ridiculously early in the year, and springtime in the northern states is notoriously fickle. But this year was different. The ambitious apricot tree burst into bloom with dainty white and light pink blossoms covering every limb of its twenty foot stature. Providently, the weather was moderate, and tiny apricots began to grow as the tree leafed out around them. Gradually, spring morphed into a hot summer, and by mid-July the tree limbs were drooping from the weight of the fruit. By early August the fruit was ripe. A canning enthusiast, my mother got out her water-bath canner, sterilized her jars, grabbed her laundry basket and started picking apricots.

Twice a day she filled her basket, washed and pitted apricots, packed them into quart jars with some sugar syrup. Then, while the apricots processed in the canner, she sterilized the next set of jars, prepared more syrup and headed back out to pick more apricots. At the end of the day, she would boil down the extra apricots into a batch of jam. (To a child that jam smelled as sweet as candy as it cooked). Once thickened, the hot jam was ladled into up-cycled jars of various sizes and shapes. Then a layer of hot melted paraffin was poured over the jam to “seal” it. While filling our mouths with warm juicy freshly-picked apricots, my siblings and I looked forward to eating home-canned apricot jam on homemade bread.

Mom’s canning routine went on for days until finally the now overly ripe apricots fell off the tree.  She had canned dozens of jars of fruit, nectar and jam and we enjoyed the bounty for several years, taking them with us when we moved.

Throughout the fifty years since the apricot summer, my mother and I have continued to can, but never has there been another neighborhood apricot tree. In fact, around here backyard apricot trees have mostly been cut down and chopped up for firewood. Its as if apricots have become a forgotten fruit.

Curious about the significance of apricots in the American diet, I started doing some research. The earliest record of an apricot tree in the US was in Virginia in 1720 grown from seeds brought over from England, however the fruit was slow to catch on. The west coast was introduced to apricots by Spanish monks coming north from Mexico into what is now California to establish missions. The apricot trees were planted and cultivated in the gardens of these religious settlements.

The Santa Clara Valley, the location of one of the Spanish missions, proved to be an ideal location for growing apricots and other fruits known as drupes (this includes peaches and almonds). The fruit became popular almost immediately. By 1792, California produced its first significant apricot crop. A hundred years later, the annual apricot harvest was close to three million pounds. During the first quarter of the twentieth century, fruit production increased as orchards grew, reaching 24,000 acres of trees producing 160,000 tons of apricots by the late 1920s. 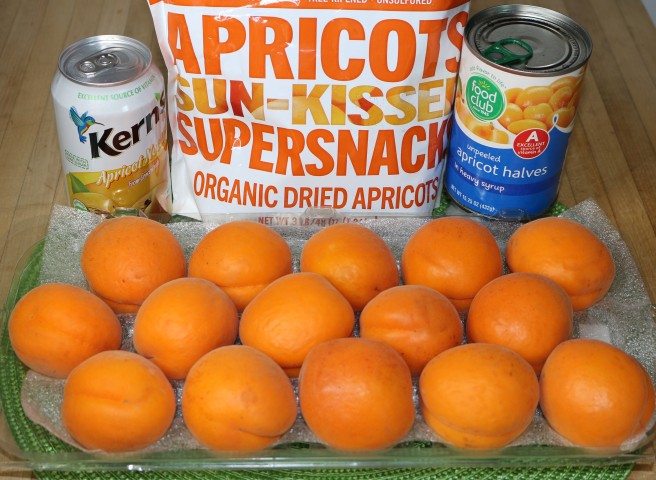 What in the world did America do with all those apricots? Well, during the twenties, 60 — 75% of California’s apricots were dried (laid on fruit racks by hand out in the sun), 15 — 35% were commercially canned and shipped out for retail, and less than 10% were shipped fresh or consumed locally. At that time, the US was involved in restoration efforts in post-WWI Europe by helping to feed the hungry, so many of California’s dried apricots were exported to Germany. That is, until Hitler came to power and suddenly stopped importing from the US in 1933. This happened as American farmers were  grappling with low demand and even lower prices brought on by the Great Depression. At one point, the US Government stepped in and purchased most of California’s apricots to prevent farmers from just plowing them under because of the extremely low prices. The apricots were distributed this time to feed America’s hungry.

After Japan bombed Pearl Harbor engaging the the United States in WWII, the US government again purchased almost all the dried California apricots to feed the US military and that of its allies. In 1944 and 45 all the California apricots were reserved for the war effort.

Following WWII, interest in apricots began to wane. Orchards in the Santa Clara valley were sold in large parcels to the aeronautics, defense and technology industries, leading to Santa Clara Valley’s “make-over” into Silicon Valley. In 1964 there were still 35,000 acres of apricot orchards in California, but they had dispersed to other areas. Today only about 17,000 acres of apricot trees remain.

In the 1970s, dried apricots had a bit of a resurgence with the popularity of tail mix. Although raisins were the dried fruit most commonly added, many people liked dried apricots in the mix as well. Now days folks make trail mix from any combination of their favorite dried fruits, seeds, nuts, cereals, grains and of course, candy.

As I researched my twentieth-century cookbooks, I found that at one time the use of apricots was common and creative with a majority of recipes calling for dried apricots. Only instructions for home canning or jam-making called for fresh apricots. It became evident that during the twentieth century it was common for home cooks to keep a supply of dried apricots, like raisins, on hand for cooking and baking. Never having cooked or baked with dried apricots all these recipes piqued my interest. Over the next several months, I will feature some of these twentieth-century apricot recipes in my blog posts so we can appreciate the creativity of our mothers and grandmothers cooking.

Recently, I enjoyed a walk down memory lane by making a batch of apricot jam. I created a photo collage as I worked. You will notice that I even sealed one of the jars of jam with paraffin like my mother used to do. The others I sealed in my water-bath canner. Enjoy! 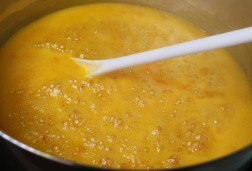 Combine jam ingredients and bring to a boil. 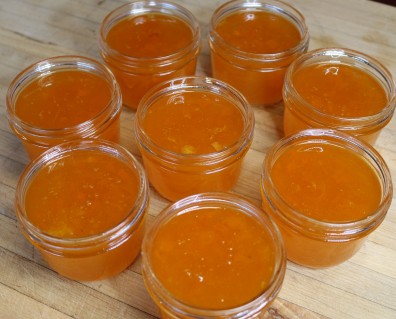 Melting paraffin in a repurposed metal can.