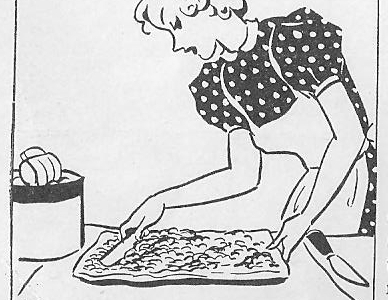 Cheese Is Choice — It Should Be Used As A Staple Food

Cheese for “trimming” other less savory foods and for making leftovers go farther is indeed a boon to the cook. How often it helps answer that ever-present question “What shall we have for supper?” Sometimes it serves to flavor a white sauce to pour over hard-cooked eggs on toast or to cover raw eggs in a baking dish which is set in the oven until the eggs are firm. Sometimes cheese sauce is used with vegetables such a cauliflower or cabbage, which are then covered with crumbs and baked until brown. Escalloped vegetable with cheese has a certain “body” which makes it satisfying as a main luncheon or supper dish.

A dish of fresh cottage cheese on the table will supplement the summer vegetables and fruits which we like to use lavishly in their season. It occasionally may be varied by mixing with cut chives or chopped onions, or surrounded with preserves or garnished with jelly.

The fancy cheeses which have more distinct and individual flavors lend themselves to occasional use but for every day, the plain American or cottage cheeses are the most satisfactory. Cottage cheese in its own form can be digested easily by children, as well as by the older members of the family, but the richer cheeses which contain more fat should always be diluted for the children and often for the rest of the family. Mixed with other blander foods such as white sauces, vegetables and rice or macaroni, cheese should appear often on the table.

Slice bread one-half inch thick and cover with thin slices of cheese. Sprinkle with salt and paprika and lay two slices of bacon on each piece. Place in dripping pan and bake in hot oven (400 degrees F.) until bacon is crisp and cheese is melted. If you have a use for hard bread crumbs, the crusts may be removed from the bread, dried and ground.

Remove the pulp from tomatoes and mix with crumbs. Cook onion in butter one minute and mix with crumbs and seasonings. Stuff tomatoes and bake in moderate oven (350 degrees F.) ten minutes. Remove from oven and cover with slices of cheese. Return to oven until cheese is melted and serve at once. This same recipe may be used for peppers.

Melt butter and blend with flour. Add milk and seasoning and cook until smooth and thick. Mix egg yolks, cheese and corn and add to sauce. Fold in beaten whites and bake in greased dish in pan of hot water in moderate oven (350 degrees F.) about twenty minutes until set. One-half cup chopped ham may be used instead of corn.

Cut or break cheese into large greased pie pan. Break eggs on top and sprinkle with mixed seasoning. Add milk to cover cheese and mix all together with fork. Bake in moderate oven (350 degrees F.) about fifteen minutes until cheese is melted and mixture is set.

Cook onion in bacon fat one minute and add to rice, mixing lightly with fork. Add tomatoes, season to taste and place in greased baking dish. Cut cheese in thin slices and place on top. Bake on hot oven (450 degrees F.) until cheese is melted.

Sift together flour, salt and baking powder, rub in fat and add enough milk to make dough soft enough to roll. Roll into oblong one half inch thick and sprinkle with cheeses and paprika. Roll like jelly roll and cut into inch pieces. Place close together in pie pan with cut side up. Bake in hot oven (450 degrees F.) about fifteen minutes until brown.

Pulp the grapes, cook until soft, put through colander and add skins, oranges and raisins. To every cup of mixture add a cup of sugar and cook to desired consistency. The nuts are added just before removing from fire.

Slice fruit very thin, removing seeds but not rind. It is easier to slice on a board. Fruit may be put through food chopper if preferred; this saves time but the product is not so perfect. To each pound of fruit, add three pints of water. Place in an enamel bowl and let stand for twenty-four hours. To each pound, add one pound of sugar and cook slowly until thick and clear. Test by chilling a little on a saucer. Do no overcook. Pour into sterilized glasses or jars, and seal.

The above article was originally published in The Farmer’s Wife — A Magazine For Farm Women, October 1926, Page492; by Webb Publishing Company, St. Paul, Minnesota