It turns out that home cooks have been preparing corn on the cob the same way for over a hundred years. Our pots are now stainless steel as opposed to cast iron, and our heat source is gas or electric instead of wood, but no matter the style of our stove, Americans still enjoy eating an ear of corn, piping hot and slathered with butter.

My one-hundred-year-old cookbook, Fifty-Two Sunday Dinners 1913, suggests preparing sweet corn using the tried and true method of dropping the husked ears into rapidly boiling water and cooking for five to ten minutes. This is the technique that I have used for years (recipe below) — simple and hassle free.

Have the water boiling. Remove the husks and silk from the corn and drop them at once into the boiling water; bring water quickly to boiling point and let boil rapidly five to ten minutes (depending somewhat on age of corn). Drain from water and arrange in a napkin-covered platter; serve at once.

When buying corn on the cob from a grocery store, its hard to know how long ago it was picked. Fortunately, good cookbooks offer tips on how to tell if the corn is fresh. The Modern Family Cook Book 1953 suggests popping a kernel (recipe below):

Choose the freshest corn possible. To test freshness and tenderness of corn, break a kernel with your fingernail. If the milk spurts out, the ear is young, tender and at least fairly fresh. Corn is best when cooked immediately after picking. Husk the corn and remove the silks. Have plenty of boiling water ready. Put ears of corn into a kettle and pour on enough boiling water to cover. Boil 4 to 6 minutes, depending on age and tenderness of ears. Drain thoroughly and serve immediately with salt and plenty of butter.

The Modern Family Cook Book 1953 by Meta Given

The original Weber kettle grill came out in 1952. By then America had recovered from the food rationing and shortages of WWII and outdoor grills offered a new way of cooking the recently available choice cuts of meat that folks had done without for so long. Backyard outdoor grilling took off like wildfire and we have never looked back! Right away cookbooks began to reflect this new trend, offering recipes and tips for cooking outdoors.

Farm Journal’s Country Cookbook 1959 gives instructions on two ways to cook corn on the cob outdoors — on the grill or directly in the coals (recipe below):

Iowa Corn on the Cob 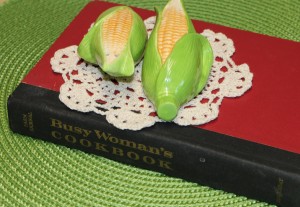 Farm Journal’s Busy Woman’s Cookbook 1971 quotes an Iowa woman offering tips for preparing corn on the cob. First she suggests a way to get rid of the corn silk, then she shares two different cooking methods — the traditional drop-the-ears-in-boiling-water method, and secondly, starting the corn on the cob in cold water. I have never tried this method, but I’m definitely interested in trying it. Finally, she warns the home cook to never salt the cooking water for corn as it toughens the kernel. Dang! I am guilty of that. I will never salt my corn water again.

An Iowa woman says, “Most good cooks in our neighborhood rush the corn from the garden, husk it; use a dry vegetable brush to brush away the stubborn silk, and drop the ears into boiling water to cover. They cook it 5 to 8 minutes — never more than 10. But I get more praise from folks around the table when I cover the corn with cold water; bring it to a boil — then drain the steaming ears and serve them at once. No smart country cook around here adds salt to the water when cooking sweet corn. It toughens the kernels.”

In the cookbook, Mrs. Witty’s Home-Style Menu Cookbook 1990, Mrs. Witty offers some up-to-date advice and suggests an energy efficient way to cook corn on the cob. She also mentions a couple of interesting add-ins (recipe below):

If corn is not to be cooked at once, refrigerate it without husking. Shuck the ears just before cooking.

Don’t heat a big potful of water, which takes time and fuel and overheats the kitchen; boil a few inches of water in a wide pot, add corn, sprinkle on a little sugar — 1 or 2 Tablespoons — clap on the lid, bring the water just back to a boil, turn off the heat, and leave the corn for 8 to 10 minutes, when it will be ready. Serve one round of ears at a time; the rest will come to no harm if left in the water for as long as a half an hour.

Some cooks salt the cooking water — I don’t, because it toughens the corn; some swear by a cupful of milk in the water, and some use milk plus salt or sugar. Whichever way seems best to you, just don’t cook corn to death, as was once considered necessary; half an hour’s boiling was a common direction in cookbooks gone by.

If there is one thing that I have noticed when catering casual summertime meals, it is that many people are a little shy about tucking into a long hot ear of corn on the cob; it seems like a big messy commitment to them. However, a three inch piece of corn on the cob seems much more manageable even to the most dainty person. So cutting the cob into thirds or fourths with a heavy sharp chef’s knife will help to alleviate their hesitancy. The cutting is done before the cooking so the corn comes out of the pot “bite-size”. Extra napkins and perhaps some toothpicks on hand helps reduce any awkwardness that guests might feel.

As far as seasoning corn on the cob, I have learned that there are other ingredients that folks enjoy besides butter and salt and pepper, although those are the most popular. Mayonnaise, in place of butter, is very popular in some areas and is my personal favorite along with salt and pepper. For those who like a little heat, chili powder, smoked paprika and lime or other flavored seasonings sprinkled on corn (or any vegetable) offers a spicy Tex-Mex flavor that some folks like.

My best advice is to serve corn on the cob often during its peak season. Enjoy!