September in America is apple picking time. Orchards in New England burst with McIntosh, Cortland, Granny Smith and Winesap, while orchards in the northwest hail Honeycrisp, Ambrosia, Cosmic Crisp and Envy apples. And vintage American cookbooks provide a plethora of apple pie recipes. Most recipes follow a classic formula — sliced apples tossed in sugar, cinnamon, nutmeg, lemon juice and some type of thickener — flour, cornstarch or tapioca, baked until the apples are tender and the pastry is golden brown — just the way grandma used to make them. I discovered one recipe in my collection that called for a not-so-secret ingredient — cheddar cheese. As it turns out, home cooks have been serving apple pie a la cheese for years (Read more HERE).

Modern Meal Maker 1939, a cookbook and menu planner, suggests serving Cheese Apple Pie for dessert during the first week in October. A typical apple pie except for one unusual ingredient — a half cup of grated cheddar. I have heard of serving apple pie with a slice of melted cheddar on top, but I have always been skeptical. Like my husband said when I showed him this recipe, “it sounds like a good way to ruin a perfectly good apple pie”. Not being one to shy away from a new (or old) recipe, I decided to give it a whirl anyway.

Using my favorite butter/oil pastry recipe, I followed the filling instructions to a T. Wanting the pie to approximate one baked in the 1930s or 40s, I chose a classic apple variety — Granny Smith. After tossing the sliced apples in the flour, sugar and spices, I filled the pastry, sprinkled the grated sharp cheddar over the apples and baked as directed. When I pulled the apple pie out of the oven, it was beautiful!

After allowing the pie to cool, I eagerly cut a slice. As I lifted the first piece from the pie plate, lovely juices began to ooze. Sadly, on top of the juices floated a glistening pool of yellow oil that had rendered from the cheese during baking. The cheese itself had become grainy and stuck in clumps to the underside of the top pastry. Not very attractive. Overall the pie was bland. It could have used more cinnamon, nutmeg, sugar and cheese for that matter, as there was no cheddar-y goodness. We even tried jazzing the pie up with ice cream — no luck. I actually threw the rest of the pie away. This recipe can definitely go back to hiding between the pages of an old cookbook.

In the 1980s, I listened to a radio show broadcast from Salt Lake City called The Gabby Gourmet. Fredric Wix, the Gabby Gourmet, a retired marine who loved cooking, helped pioneer the concept of gourmet cooking at home. Fred moved from radio to television when he was invited to host a cooking spot on KUTV’s midday news broadcast. Highly successful in both mediums, The Gabby Gourmet went on to publish a cookbook that is now out of print and highly collectible; however, some of his cooking videos are available for viewing on YouTube.

Mr. Wix shared the recipe for Taffy Apple Dip one day when I happened to be tuned in. I quickly wrote it down, and I have been serving it ever since, especially in the fall when the apples are ripe and fresh and crispy. Adults, as well as, children enjoy this dip, and it is much easier to make and eat than caramel apples. I serve the dip either at room temperature or a bit warmer, but it must be stored in the refrigerator. To jazz things up, a sprinkling of salt flakes over the caramel creates a delightfully sweet and salty contrast. Enjoy! 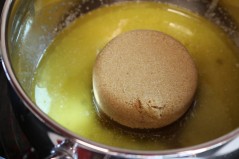 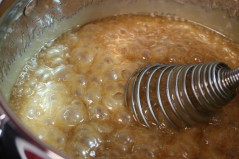 Simmer until brown sugar is dissolved. 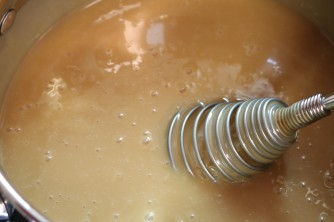 Serving Option: For a salted caramel dip, sprinkle a few flakes of coarse salt over dip before serving.

Recipe Compliments of Cookbooklady.com and The Gabby Gourmet

“A seed hidden in the heart of an apple is an orchard invisible.”

As a young man of sixteen, Oscar Tschirky immigrated to America from Switzerland with his mother in 1883 to join his older brother in New York City  where they hoped to make a better life. Within a day of his arrival, Oscar landed a job as a busboy in the Hoffman House, an elegant hotel in the city. Five years later he was manager of a dining room in Delmonico’s, the best restaurant in New York, where he refined the skills necessary to become the Matre d’ of the Waldorf Hotel (soon to become the Waldorf-Astoria). Hired before the hotel opened in 1893, he was essential in stocking supplies, hiring staff and developing management systems. Oscar, himself, turned the key on opening day and went on to become the”face” of the Waldorf-Astoria during his fifty-year career. Ironically, beloved by heads-of-state, Hollywood types and business tycoons, Oscar’s lasting claim to fame was the Waldorf salad.

Though not a chef, just three years after the opening of the Waldorf, Oscar published a 900-page cookbook titled The Cook Book by “Oscar” of the Waldorf  1896 which includes a now-ubiquitous recipe for Waldorf Salad. Calling for three simple ingredients, apples, celery and a good mayonnaise (recipe below), it seems much too humble for the glitz and glamour of New York high society, but the salad had had a victorious debut at a gala event planned and overseen by Oscar coinciding with the opening of the hotel.

Coming upon a copy of Oscar’s original Waldorf Salad recipe (above), I was disappointed that no particular variety of apple was suggested. It would be interesting to experience the exact flavor profile of the original.

Also being curious about the adaptation of the recipe over the past one hundred years, I researched nearly two dozen twentieth-century cookbooks. Interestingly I found that most of them contained a recipe for Waldorf Salad, many very similar to the original version, with some specifying red-skinned apples. The only twentieth-century cookbook, Cooking In Quilt Country 1989, that mentions using a particular variety of apple calls for Jonathan or McIntosh. Either apple may well have been the variety that Oscar used as they both grew prolifically in New York state at that time. Perhaps part of the charm and longevity of this recipe is that the home cook can personalize it simply by the variety of apple he or she uses.

One of the earliest adaptations of Waldorf Salad is the addition of chopped nuts — walnuts usually, but also pecans as mentioned in The Joy of Cooking 1931 by Irma Rombauer. Curiously, her recipe is one of the few that suggest peeling the apples before chopping. The Waldorf Salad recipe found in The Household Searchlight Recipe Book 1944 (below) stays true to Oscar’s original recipe except for the now classic addition of chopped nuts:

What’s In the Dressing

Another common adaptation to Waldorf Salad is the dressing, especially early in the century when commercial mayonnaise was in its infancy. Martha Meade’s Modern Meal Maker 1939 contains a recipe-ette called Apple and Celery Salad, but its confusing. How is the one cup shredded lettuce intended to be used — mixed in with the salad or as the lettuce cups — Hmmm. The Golden Dressing is the intriguing part of this recipe (below). Its fussy, but maybe not as fussy as homemade mayonnaise. And it sounds delish (recipe below). 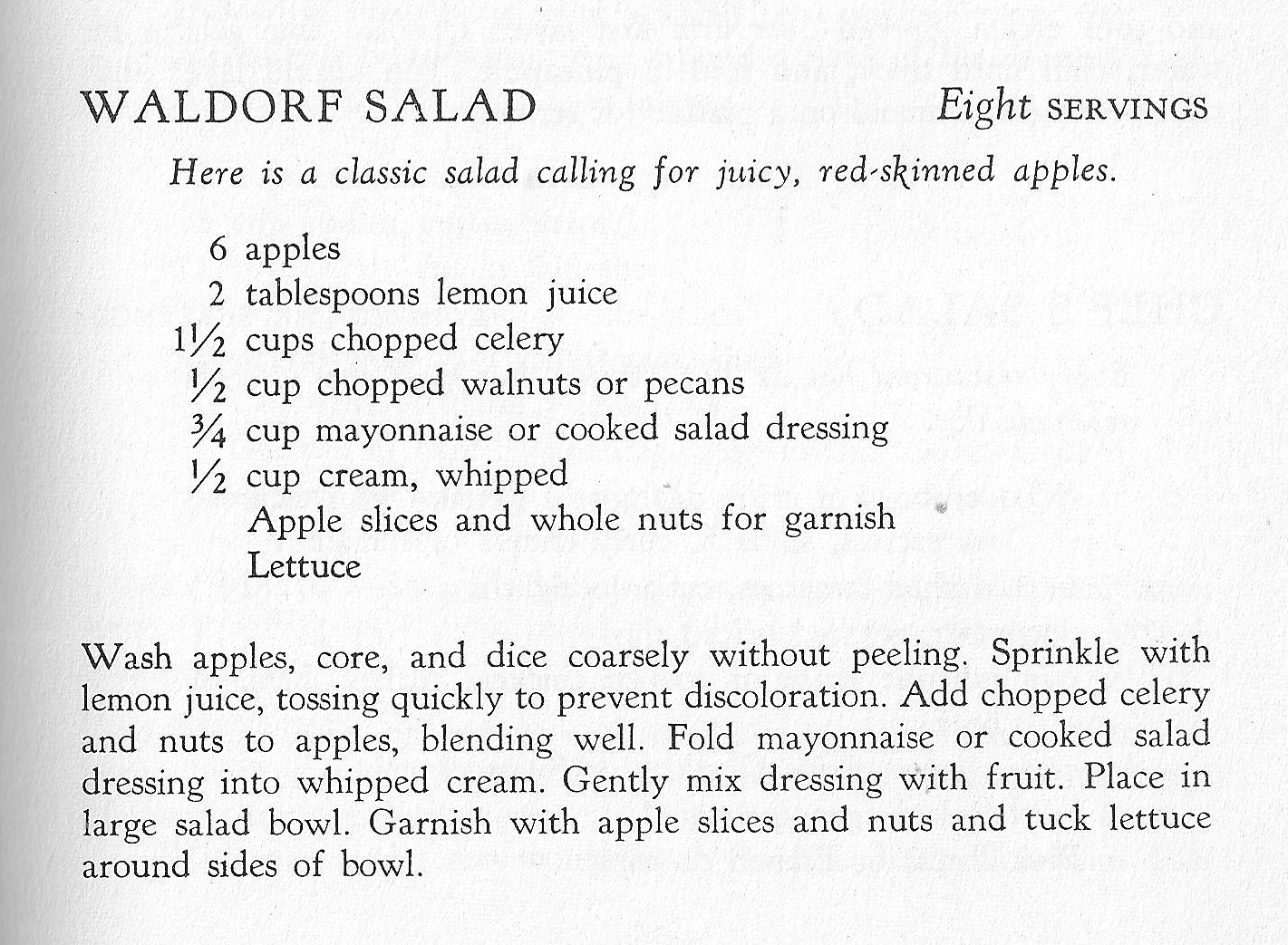 Before salad dressings were readily available in grocery stores, cooks made them at home so older recipes frequently call for a “cooked” or “boiled” dressing. A recipe for Waldorf Salad (below) printed in General Foods Cook Book 1932 containing apples, celery and nuts calls for Cooked Salad Dressing made of thickened mustard, sugar, egg yolks, vinegar and milk — sweet or sour:

A curious dressing for Waldorf Salad comes from a recipe found in The American Woman’s Cook Book 1966 which calls for a French vinaigrette to dress the apples, celery and walnuts. The salad is served on lettuce leaves and topped with a dollop of mayonnaise.

Mid-century home cooks began expressing their creativity by including additional fruits in their Waldorf Salad. The Good Housekeeping Cookbook 1963 is a perfect example of this. The recipe titled Pear Waldorf Salad (recipe below) suggests substituting fresh peeled and diced pears in place of apples in an otherwise typical Waldorf Salad. Being intrigued by this recipe and canning pears at the time, I decided to give it a try. It was delicious! Bartlett pears, however, are softer and juicier than apples causing the salad to break down quickly. If I were to make it again, I would follow the recipe’s alternate suggestion of using half apples and half pears. Notice the other inclusions in Pear Waldorf Salad — fresh, frozen, or canned pineapple, banana cubes (a strange term) or one cup sectioned oranges, and one cup grapes. The final adaptation of this recipe takes us full circle to the classic Waldorf Salad with unpared red apples, chopped celery, and walnuts tossed with a mayonnaise dressing and embellished with a half cup of raisins.

The final Waldorf Salad entry is a recipe found in Farm Journal’s Busy Woman’s Cookbook 1971 titled Waldorf Variation Salad — an appropriate title for nearly all twentieth-century Waldorf Salad recipes. It takes a citrus-y spin with frozen lemonade concentrate as the dressing (recipe below):

My Waldorf Salad recipe is fairly traditional, calling for apples, celery, and chopped pecans with a mayonnaise dressing sweetened with a little honey. Sometimes I add a handful of raisins or dried cranberries for flavor and texture. It is a delightfully crisp Autumn salad that is a nice addition to a salad bar or as a side dish. The variety of apple that I often use is Honeycrisp because of its thin, tender red skin. Older varieties such as sweet-tart Jonathon or McIntosh are also tasty choices. For a lighter version of the dressing, a thick plain Greek yogurt can be used in place of the mayo, but the salad will be missing its wonderful piquant flavor. Enjoy! 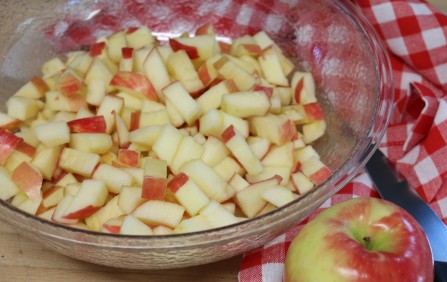 Pour dressing over apples and celery. 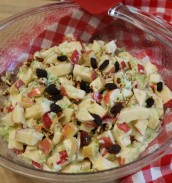 Toss in chopped pecans and raisins if desired. 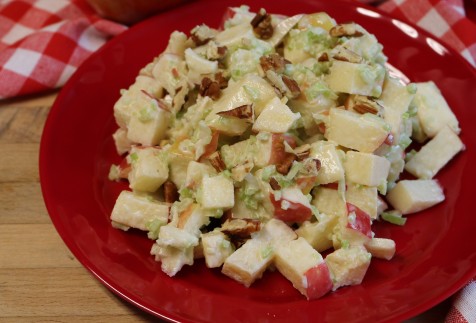 Note: Yogurt dressing begins to break down quickly so plan to serve the salad no more than an hour after preparing. The mayonnaise dressing is more stable.