“Pies, plain old fruit pies anyway, were not In during the Sixties: too simple, too old-fashioned, too uncreative. But there was a class of pie that a modern gal could serve and still be considered a go-go gourmet. These acceptably chic pies almost always had a crushed graham cracker or cookie crust and were fill with ice cream, or pudding, or gelatin mixed with something sweet and creamy.” ~Sylvia Lovegren, Fashionable Food Seven Decades of Food Fads 1995

While researching twentieth-century cookbooks for my blog post Rhubarb’s Reign, I discovered a “lost” sixties-chic recipe for Rhubarb Whipped Cream Pie in The American Woman’s Cook Book 1966 containing then trendy ingredients including gelatin and heavy whipped cream in a crumb crust. The resulting refrigerator pie smacked of tangy rhubarb mellowed by the rich smoothness of  whipped cream. The crunch of the graham cracker crumbs added a good textural contrast. Rhubarb Whipped Cream Pie is a delightfully retro alternative to traditional rhubarb pie — delicious on a hot summers day.

The recipe for Rhubarb Whipped Cream Pie, suggests a Cereal Flake (corn flake) Pie Shell, I opted for the now classic graham cracker crumb crust called Crumb Pie Shell (above) included in the same chapter as the pie. The crumb mixture was easy to work with, kept its shape and held together well, however, it was a little too sweet for modern tastes. Next time I would add maybe half the sugar called for to cut down on the sweetness.

While preparing the filling for Rhubarb Whipped Cream Pie (recipe above), I took a gamble and modernized the amount of unflavored gelatin in the recipe to coincide with the product packaging that is available now: instead of two tablespoons of gelatin, I used two packets (each packet equaling about 2 teaspoons) of Knox unflavored gelatin. In spite of this adjustment, the pie maintained a good set.

Like the crumb crust, the rhubarb filling ended up being very sweet. A full cup of sugar was more than the filling needed, nevertheless tartness in varieties of rhubarb vary so the amount of sweetener added is best left up to the cook. Next time I would start with 2/3 cup sugar and work my way up from there, tasting as I go.

My final adjustment to the recipe was to stabilize the heavy cream before whipping by blending two tablespoons of mascarpone cheese into the cream on a low speed before whipping at a higher speed. The combination of gelatin in the filling and the stabilized whipped cream kept the filling firm and the crust crunchy for several days. I would definitely make Rhubarb Cream Pie again. Enjoy! 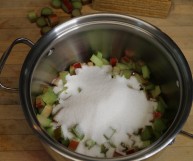 Bring rhubarb, sugar and gelatin mixture to a boil.