Every spring, when I was a kid, my mom would make Creamed New Potatoes and Peas. My siblings and I loved it. Recently, I started wondering about the history of this dish — did the world know about Creamed New Potatoes and Peas or was it just a regional dish developed here in potato-growing country. I delved into my twentieth-century cookbooks to see what I could find. Right away, I learned that Creamed Potatoes has been a “thing” for at least a century, but the peas? Not so much. I also learned, quite unexpectedly, about a “lost” recipe style.

What’s In a Recipe?

My mother cooked mostly without a recipe, but as modern home cooks, we have some expectations regarding the information to be included in a recipe — a list of ingredients, the amount needed, directions on assembly, cooking or baking instructions, even serving suggestions. Interestingly, a number of recipes in my older cookbooks are written instead in a short truncated style that doesn’t include a lot of detail, leaving a home cook to rely on her own instincts and kitchen experience.

Examples of recipes written in this brief style:

There are no amounts given in the recipe above, nor does it tell the ratio of potatoes to white sauce.  Another brief recipe below, gives only three sentences of instruction. The third recipe again has no measurements. I’m lost!

No wonder my mother and grandmother didn’t cook with a recipe. They weren’t always that helpful. One cookbook from the 1930s had so many recipes written in this truncated format that the editors gave them a name — “recipe-ettes” (see below). I’m glad this style didn’t catch on. I prefer lots of detail in my recipes.

While reading, I also looked into the history of white sauce (see recipe above). I learned that white sauce is simply the American version of a french sauce that has been around for hundreds of years called Bechamel (recipe below). Both sauces begin with a roux, which is a mixture of equal parts fat (usually butter) and flour that is cooked together for several minutes. For the American sauce, cold milk or cream is whisked into the hot roux, brought to a boil and simmered until the mixture is thickened. The French add broth to the roux, then finish the bechamel with cream. They also tend to cook their sauces much longer than Americans. I guess we are in a hurry.

Some Creamed New Potato recipes call for a super-simple sauce of heated cream seasoned with butter and salt and pepper to be poured over cooked potatoes (below). That’s for when we are really in a hurry.

Adding herbs or spices to an ordinary dish is a great way to personalize a recipe and turn it into a signature dish. My old cookbooks offered some suggestions. The New York Times Cook Book 1961 featured a recipe for Herbed New Potatoes with Fresh Peas (finally someone added peas!). It calls for two pounds new potatoes, one pound fresh shelled green peas and a little light cream with dried basil for flavor and fresh parsley for garnish.  A Creamed Potatoes recipe found in Joy of Cooking 1985 calls for boiled new potatoes, white sauce and dill seed for flavor.  Betty Crocker’s Picture Cook Book 1950 calls for small new potatoes, white sauce and parsley or chives for garnish. Several other recipes call for a dusting of paprika to finish the dish. 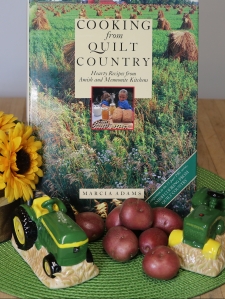 In the late eighties, I watched a cooking show on PBS hosted by Marcia Adams, author of the award-winning cookbook Cooking from Quilt Country 1989 featuring regional (mid-west) home-style cooking. I enjoyed her program so much that I ordered the companion cookbook. I have loved it these past thirty years. The recipes are humble yet delicious, calling for ingredients readily available from farmer’s markets and grocery stores. It is from this book (and my mom’s “recipe”) that I based my recipe for Creamed New Potatoes and Peas (Yes! Adam’s recipe actually calls for peas). She uses two pounds small red potatoes and a cup and a half of green peas, fresh or frozen. The peas are added to the thin white sauce that has been seasoned with nutmeg (I have never included nutmeg), and is then poured over the boiled potatoes. She suggests a garnish of mint leaves or chives. The directions for the dish are four paragraphs long with plenty of detail. Awesome! With the addition of chopped onion, celery and a little garlic, the recipe has become my own. Enjoy!