The coronation of young Queen Victoria of England in 1837 was a time of national celebration. British subjects of every class wanted to have a piece of the event. Manufacturers, having anticipated the forthcoming fervor, produced everything from pins to dinnerware as souvenirs.  A horticultural commemorative was also announced at that time — a newly developed variety of rhubarb, dubbed Victoria Rhubarb in honor of the new queen herself. Said to be easy to grow,  sweet, tender and flavorful, gardeners and dessert makers went wild! As a result, rhubarb reigned supreme in English kitchens throughout Victoria’s lifetime and is still highly regarded.

Meanwhile, as the British Victorians were adding rhubarb to every dish sweet or savory, Americans too were growing and cooking with rhubarb. The humble “pie plant”, a faithful perennial, has been growing  in America’s gardens for hundreds of years, spreading its broad green leaves in the spring sunshine shading slender red/green stalks beneath. One of the earliest “fruits” from the garden (packed with vitamin C), home cooks were glad to have something fresh to put on the table. Needing plenty of sugar to offset its tartness, rhubarb is most often associated with desserts — typically pie.

In perusing the indexes of my twentieth-century cookbooks, I was astounded to discover that a number of books featured over one hundred variations of pie, including several types of rhubarb pie. It’s very apparent that Americans are fond of pie, but in order to have pie, one must also have good pastry, and it turns out there has been a British influence in our pastry making as well.

From Lard to Butter

For generations, home cooks, including my grandmothers, have used lard (rendered pig fat) — leaf lard to be specific (a higher quality of fat found near the kidneys) —  to make pastry. It is reputed to make the most tender and flaky pie crusts attainable, however, its apparent that lard has been falling out of favor as only one (Joy of Cooking 1985) of a dozen or so twentieth-century cookbooks listed lard as a fat option. Almost all the other pastry recipes called for shortening to be gently worked into the flour with the fingertips or to be cut in using a pastry cutter or two knives scissor-fashion. Several cookbooks included a pastry option made with vegetable oil as opposed to solid shortening. Joy of Cooking 1985 also offered a more modern take on pastry calling for butter in place of some of the shortening (using all butter in pastry is trending at the present time). A few other unusual pastry additions that I came across were lemon juice, vinegar, white wine, an egg, milk instead of water, boiling water instead of ice water and — most surprisingly — baking powder.

In a cookbook pamphlet put out by the Royal Baking Powder Company, publication date unknown, I discovered a recipe for Plain Pastry (above) calling for one teaspoon of baking powder to be sifted in with the flour and salt. A paragraph at the top of the page (also above) explains why baking powder should be add to the pastry — “baking powder added to pastry will help to make it light and flaky”. Thinking that this was just a quirky idea put out by a baking powder company, I was quite surprised to find it again in my 1913 Fifty-Two Sunday Dinners Cook Book. I then discovered an English Pastry recipe in Betty Crocker’s Picture Cook Book 1950 that also calls for baking powder. Evidently the idea of using baking powder to make the perfect pie crust comes from across the pond. I don’t know if British home cooks still use it, but in America, I think baking powder in pastry is mostly “lost”.

While researching, I categorized rhubarb pie into three general types: traditional Rhubarb Pie containing rhubarb cut in small pieces, sweetened with plenty of sugar, thickened with flour, cornstarch or tapioca, a pinch of salt and a pat of butter; secondly, Rhubarb Custard Pie containing the above ingredients, as well as, two or three eggs lightly beaten, a little milk or cream and a dash of nutmeg; and then thirdly — a combination Rhubarb Pie — similar to the traditional pie but filled with a mixture of rhubarb and another fruit such as strawberries, blueberries or pineapple. Yes, I found recipes with each of these combinations.

Speaking of combination pies, the most unusual Rhubarb Pie recipe appears in my grandmother’s The Household Searchlight Recipe Book 1944 (above). The recipe was sent in by a subscriber of Household Magazine and was included in their cookbook. It seems to be a combination of Rhubarb Pie and Raisin Pie. I like rhubarb and I like raisins, but combined? Not so much! And oddly, its thickened with cracker crumbs. Are we talking saltines here or graham cracker crumbs? I just don’t know. The other thing I wonder is why are there smudges on this page. My grandmother owned this cookbook her whole adult life so they would have happened in her kitchen. Did she try this rhubarb/raisin concoction?!  I wonder if my grandfather liked it. Would I like some? No, thank you.

On the opposite end of the Rhubarb Pie spectrum is a recipe I am dying to try: Rhubarb Whipped Cream Pie (above) found in the newest of my old cookbooks — The American Woman’s Cook Book 1966. Not a typical baked two-crust pie, it is a sort of cream-pie-meets-ice-box pie with a crumb crust. To begin the filling, the recipe calls for stewed rhubarb which is simply chopped rhubarb and sugar simmered with a few tablespoons of water until the rhubarb is just tender. Unflavored gelatin is then added to lend stability to the filling. When the cooked mixture is cooled, the heavy cream is whipped and gently folded into the stewed rhubarb. The luscious mixture is spooned into a nine-inch crumb pie shell and refrigerated until firmly set. You will notice that the recipe calls for a Cereal Flake Pie Shell. This is simply crushed cornflakes made into a pie crust similar to a graham cracker crumb crust which could easily be substituted. It is really too bad that this recipe has become “lost” over the years. I plan to give it a try when my rhubarb comes on. I’ll get back to you. (I tried the recipe for Rhubarb Whipped Cream Pie! Here are my results).

I hope you have enjoyed our cookbook journey. Below is the Rhubarb Custard Pie recipe that I have used for nearly forty years. It is my husband’s favorite. Enjoy! 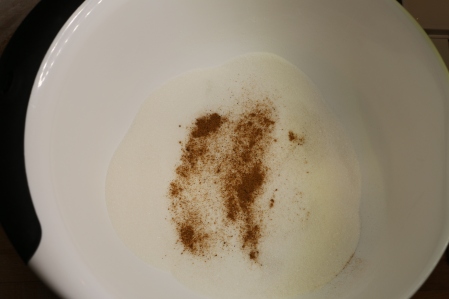 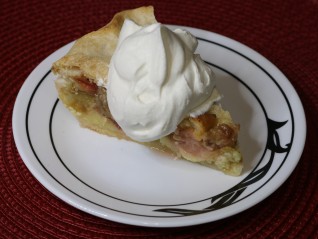 Option: Before baking, lightly brush top pastry with a little milk and sprinkle with a pinch or two of sugar to add sparkle and crunch.